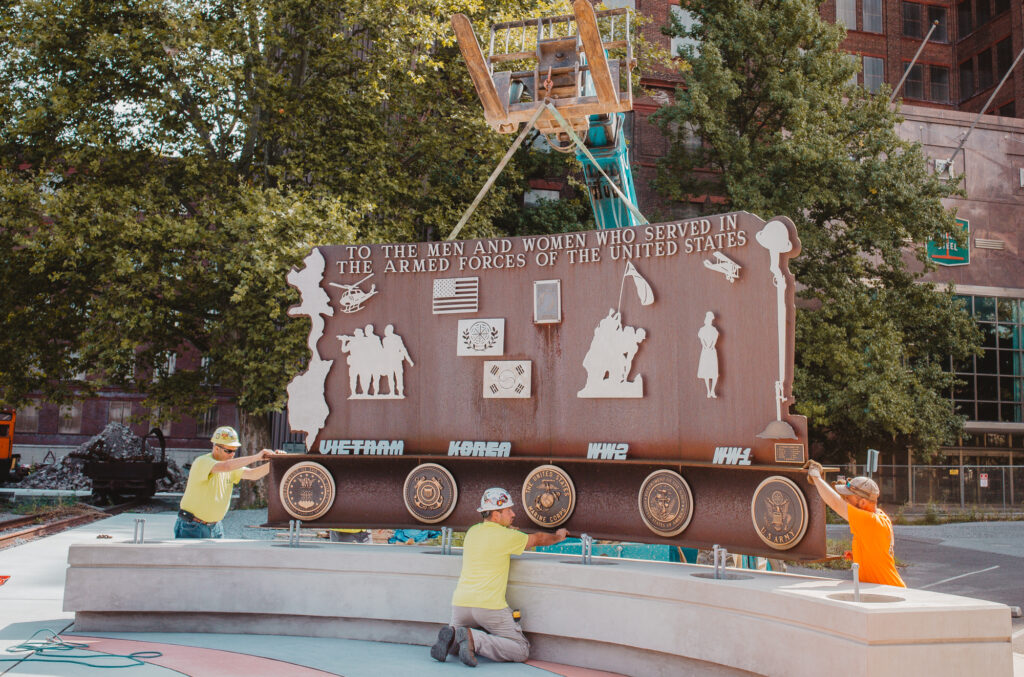 BETHLEHEM, Pa – The National Museum of Industrial History, in collaboration with Bethlehem’s Steelworkers Veterans Memorial Committee, will host a ceremony honoring those who served in the armed forces on Veterans Day, November 11th, at 10a.m. in the museum’s plaza.  All guests are asked to wear masks and observe social distancing guidelines.

The event will include the rededication of the Steelworkers Veterans Memorial, recently relocated from its original spot outside the plant’s employee entrance gate to the museum’s new outdoor park. The relocation was financed by the Bethlehem Redevelopment Authority through a $25,000 Local Shared Account grant from Pennsylvania’s Commonwealth Financing Authority and a $34,000 grant from the Bethlehem Parking Authority.

The memorial, which was originally dedicated in May 1989 by then-Bethlehem Steel Chairman Walt Williams, began as an idea from a veterans committee within the company. What was supposed to be a small plaque became a more substantial undertaking under the vision of the late Raymond F. Rosati, Jr., a Bethlehem Steel millwright from Hellertown. Mr. Rosati, a U.S. Marine Corps and Vietnam Veteran, designed the memorial which was built with the aid of plant personnel and machine shops, and constructed in the shipping yard maintenance shop. With plaques added in later years through grants procured by the late Rep. William C. Rybak, the monument serves as a testament to the workers and veterans of the nation’s steel mills.

The ceremony will include a procession from the Nam Knights of America Motorcycle Club, presenting of the colors from the Lehigh University Reserve Officer Training Corps, and will honor Richard G. Schimmel, an Allentown native and WWII veteran who survived the attacks on Pearl Harbor.  Keynote remarks will be given by United States Army Master Sergeant Stephan C. Potsko.

MSG Potsko is a Military Science Instructor at Lehigh University and is assigned to the 4-413 Regiment SROTC.  He is an Assistant Director at Lehigh University’s Vistex Institute for Executive Learning and Research. MSG Potsko earned his Masters of Business Administration at Lehigh University in Bethlehem, Pennsylvania. Prior to that he earned a Bachelor Degree from Excelsior College in Albany, New York.  Over his nearly 30-year-career he has earned the Meritorious Service Medal, Army Commendation (3rd OLC), Army Achievement Medal (6th OLC), and Army Good Conduct Medal, among several other decorations.

From 10am to 4pm the National Museum of Industrial History will be free to all veterans and their families.