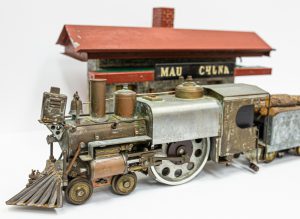 The National Museum of Industrial History (NMIH), in partnership with the Allentown & Auburn Railroad, is set to unveil some of the museum’s newest collection acquisitions at the 2019 Kutztown Folk Festival, running this year from June 29th to July 7th.

Unseen for 53 years, the display contains highlights from the William V. McGorry collection of model trains and will be showcased at the Allentown & Auburn Railroad Exhibit. Considered more akin to folk art than precision miniature train replicas, these models were hand built from scratch over a span of at least five decades in the early twentieth century by one man. The collection was only recently uncovered after being packed away for over half a century and donated to NMIH.

McGorry started his career in the coal mines of Pennsylvania, beginning in Nesquehoning and eventually relocating

to Allentown. While working in the mines as a teenager, he began modelling the anthracite railroad world around him. Many of his pieces depict local prototypes, from a steam-powered Lehigh & New England Railroad coal train to a diesel-powered, Lehigh Valley Railroad passenger train painted in Cornell Red. The majority of the trains operated on O scale track, with some built to an even larger gauge. The models will be enjoyed again thanks to the generosity of Ted Lyons, whose family inherited and protected the models after Mr. McGorry passed away in 1966.

Additional pieces from the collection will be on display throughout the summer at the Kutztown Train Station, 232 Railroad St, Kutztown, PA, open during the operating days of the Allentown & Auburn Railroad. Please visit the railroad’s website for a detailed schedule.

About the Kutztown Folk Festival
The Kutztown Folk Festival is the oldest continuously operated folklife festival in America. Held in Kutztown, Pennsylvania, the nine-day festival draws visitors from all over the world, entertaining families while providing insight and understanding of the traditions of the Pennsylvania Dutch and their fascinating way of life. The Kutztown Folk Festival features authentic folklife demonstrations, a wide variety of Pennsylvania Dutch food; over 200 nationally recognized, juried folk artists and traditional American craftsmen; over 2,500 locally hand-made quilts on display and for sale; antiques and collectables; six stages of entertainment; music and dancing; and a wide range of children’s activities.