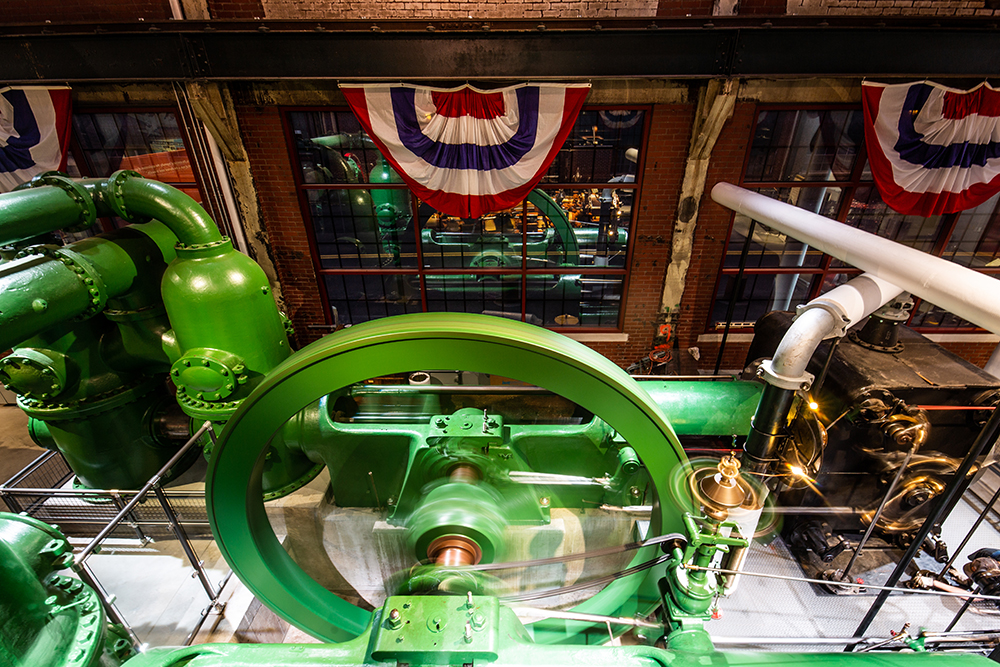 For more than a decade, the National Museum of Industrial History has been working with staff and volunteers to restore a massive 115-ton stationary steam engine to working order.  Now, with the contributions of local companies and thousands of volunteer hours, the museum’s Corliss water pumping engine runs again, 105 years after being built by the Snow Steam Pump Works in Buffalo, N.Y.  The engine was used by the York Water Company and pumped eight million gallons of water per day.  Today, the engine, the most powerful operating water works steam engine in North America, is a focal point of the museum’s 13,000 square foot exhibit space, where it has painstakingly been mechanically restored to its former glory and repainted its original color.  From May 31 through June 2, the museum will debut the operational engine to the public for the first time.  Patrons will be able to see the engine at work and hear from museum experts and guest lecturers during special programming throughout the weekend which is generously sponsored by the American Society of Mechanical Engineers (ASME).

“The amount of time and dedication spent by our staff, volunteers, and community partners in bringing this mechanical marvel back to life has been amazing,” said Kara Mohsinger, president and CEO of the museum.  “That such an intricate and large machine can be restored to working order nearly 40 years after it last ran is a testament to this institution’s dedication to preserving the country’s industrial heritage.”

The engine was first installed in the museum in 2015, before any other exhibits or even the concrete flooring.  With the help of industry experts and community partners, the total restoration process from installation to operational status took four years.  Victaulic, a developer and producer of mechanical pipe joining systems in Easton, Pa., celebrating its 100-year anniversary, helped outfit the engine with a newly developed grooved mechanical joint for saturated steam systems—the first product of its kind that eliminates the need to weld.  Other companies, including Bean Construction, Ward Manufacturing, Worth & Company, and many more also played integral roles in restoring the engine.“The restored Corliss steam engine will undoubtedly impress and inspire visitors young and old,” says ASME President-elect Richard Laudenat. “This piece of mechanical engineering history and the museum as a whole play an important role in STEM education and the development of our future workforce. ASME applauds the efforts of the volunteers and partners who made this exhibit possible.”

The Corliss’ debut weekend officially kicks off on Friday, May 31, with a special tour and presentation at 11 a.m. with the museum’s historian, Mike Piersa. Piersa will detail the restoration process and describe different aspects of the machine’s operation, from its 14-foot diameter flywheel to the governor and gauges on the engine.  Participants will then carpool to Phillipsburg, N.J., where they will have the rare chance to see another restored steam engine at an almost completely intact steam-era waterworks.  The Phillipsburg engine is currently down for maintenance, which will allow guests the unique opportunity to climb up and down the five-story tall machine.  Expert guides will discuss the history of the site, restoration work on the engine, and demonstrate the historic electric motor that powered another pump.  Admission to the special talk and tour of both engines is $25 per person, with proceeds going to both the National Museum of Industrial History and the Friends of the New Jersey Transportation Heritage Center to further fund the restoration of historical machinery.

NMIH’s Corliss engine will operate at 10 a.m., 12 p.m., and 3 p.m., Friday through Sunday, allowing guests with regular museum admission to experience the engine in operation. Prior to the 12 p.m. demonstrations on Saturday and Sunday, NMIH will host a ‘whistle blow’ with steam whistles from the museum’s collection. Visitors are encouraged to bring their own antique steam whistles and participate. The museum will also host an all-day demonstration of scale steam engine models, demonstrating different types of engines using artifacts from the museum’s collection.

The festivities continue at 11 a.m. on Saturday, June 1, with a special presentation with the museum’s historian offering a detailed overview of the engine’s meticulous renovation.  From pouring special reinforced concrete foundations and utilizing massive cranes to put it in place, to painting the engine to its original scheme and firing it up for the first time, visitors will have a special opportunity to see what was involved in such a historic restoration and ask questions of the restoration team. The presentation is included in regular museum admission.

Finally, on Sunday, June 2, the museum will host an encore presentation on the Corliss engine’s design and restoration at 11 a.m., and a 2 p.m. presentation on the history of the waterworks engines used to pump water to millions of people across the country, spawning the industrial revolution and the growth of modern cities.  Both presentations are included in regular museum admission.

About the National Museum of Industrial History
A Smithsonian Institution-affiliate, the National Museum of Industrial History is dedicated to preserving America’s rich industrial heritage. Housed in an 18,000-square-foot, 100-year-old former Bethlehem Steel facility on the largest private brownfield in America, the Museum is home to exciting exhibits, engaging programs and amazing history.  Learn more at nmih.org

About ASME
ASME helps the global engineering community develop solutions to real world challenges. Founded in 1880 as the American Society of Mechanical Engineers, ASME is a not-for-profit professional organization that enables collaboration, knowledge sharing and skill development across all engineering disciplines, while promoting the vital role of the engineer in society. ASME codes and standards, publications, conferences, continuing education and professional development programs provide a foundation for advancing technical knowledge and a safer world. For more information visit www.asme.org.