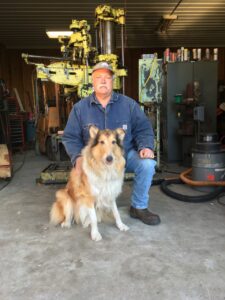 “Someone once told me that you only stop learning when you die,” said Bob Swan, the newest member of the National Museum of Industrial History restoration team. He added, “I guess that’s why I wanted to get involved in the museum after I retired earlier this year. There are so many talented people …that you can’t help but learn something new every time you get involved in a project.”

After a remarkable 38-year career as a tool and die maker with Air Products & Chemicals, Bob brings his own unique skillset to the team. Whether it’s fabricating long-obsolete parts or welding a broken casting, Bob’s contribution bridges an important gap in the museum’s restoration efforts. In fact, Bob fabricated a ladle pre-heat torch stand and repaired the furnace that melted cast iron for the commemorative medallions poured during the recent “Last Cast 25” event held at NMIH. Bob’s creativity and handiwork were instrumental to the overall success of the program.

Flanked by his collie, Lenny, a tour of Bob’s barn is a walk through a bygone era of Bridgeport milling machines, engine lathes, drill presses and welders. Bob brings these machines to life with the kind of skill that can only be acquired through decades of hands-on experience. His laid-back demeanor is reflected in Lenny who always seems to find a comfortable place in the shop near Bob while he’s working.

Amidst the equipment and shop clutter is Bob’s pride and joy, a vintage 1913 Aultman-Taylor steam-powered tractor. Like a modern-day power take-off tractor, the engine powered everything from feed mills and sawmills to rock crushers and road graders. A real workhorse of its day, the Aultman-Taylor is still fully functional, although it shows signs of wear after decades of service. Looking at the worn-down treads on the massive steel drive wheels reminds one of a broken-in pair of work boots; old and worn but still comfortable and ready to march on.

The winding road that led to the Aultman-Taylor and ultimately to museum started over forty years ago, when, as a teenager, Bob began attending the Blue Mountain Antique Gas and Steam Engine Association Show in Jacktown (Bangor), Pennsylvania. “I really got hooked on steam engines at Jacktown,” said Mr. Swan. “As kids we would stay at Jacktown overnight. Our job was to keep the boilers on the steam engines running until morning.” Early on Bob recognized that his life’s mission was to own a steam engine.

Bob worked his way up to the steam engine, acquiring a gas-engine powered saw while still a teenager.  The opportunity presented itself while traveling with a friend’s father who was doing weld repair work at the Danner Sawmill in Weaversville. “Mr. Danner had this antique reciprocating crosscut saw for cutting down trees,” Swan recalled. “I was so amazed by this machine and the way the multiple parts functioned together that at 14 years old I asked Mr. Danner if he would sell it to me.” While the 80-year-old Danner was not ready to part with the saw at the time, Bob would visit him occasionally just to see if he might have had a change of heart. After three or four years his persistence finally paid off and Bob found himself the proud owner of the antique machine.

The passion for steam engines has stayed with Bob since that time. One day in May 1998 while vacationing with his wife in Lancaster, Bob noticed a sign for the Rough and Tumble Engineers Historical Association Museum. While not part of their plans, Bob convinced his wife to make a stop at Rough and Tumble, a side trip that had a major impact on his steam-driven interests. “When we got to Rough and Tumble there were guys driving all kinds of steam engines around the site,” said Swan.

“It was there that I also learned about the ‘Steam School’ being conducted by John Johnson.” Turns out that Steam School had limited openings and there was a long waiting list for those wanting to attend. Again, Bob’s persistence to his mission paid off and he laughs when recounting the story about how he finally got signed up. After four years of trying, “I waited all night at the Rough and Tumble meet and ambushed Johnson at 4:00AM, but finally got on the roster.” Bob is still amazed by what he learned over the two weekends of training from “very knowledgeable people” who were happy to share their experience.

So when the Aultman-Taylor became available, Bob was technically prepared to meet his destiny, but the backstory about how Bob funded this acquisition is a tribute to teamwork, focus, and problem-solving. Bob’s tenure at Air Products started in the tool and die shop, but he was soon lured to research and development. “They always had something new and interesting going on in R&D and I guess that was the attraction,” recalls Swan. Bob was part of an R&D team in the gasses division that was involved in proof-of-concept experimentation, sample preparation, and results testing.

Moreover, the team was also engaged in many projects focused on innovation and creating more effective and efficient ways to work with metal. As a result, Bob is named on many team patents having to do with annealing, metalized spraying, bearing tempering, and oxide waste reduction. “In the day,” says Bob, “Air Products used to provide healthy cash awards for patents and that’s where the funds came from to buy the traction engine.” Bob’s sense of team and willingness to go the extra mile is what ultimately led him to become an NMIH restoration volunteer.

Bob first met Mike Piersa, NMIH’s historian, when he came to the museum to see the Corliss steam engine run. After being introduced, Bob learned that Mike was looking for someone who could fabricate a broken part on the Corliss. Bob volunteered on the spot to give the repair a try and decided to join the restoration team. “It’s ironic,” notes Mr. Swan, “that after all the years of attending Jacktown and Rough and Tumble I never ran across Mike or some of the other restoration volunteers who have been big fans of these events for many years.”

Either way, Bob says he’s really happy to be part of the restoration team. “After I retired, I was looking for something to do and this really aligns with my interest in steam engines, old machinery, and preservation. There’s great camaraderie, focus on solving problems, and getting projects completed for the Museum.” According to Mr. Swan, the people you meet at NMIH have a great diversity of knowledge and experience and are always willing to share what they know. He looks forward to volunteering and notes that time spent at the museum piques his curiosity and feeds his need for continued learning.