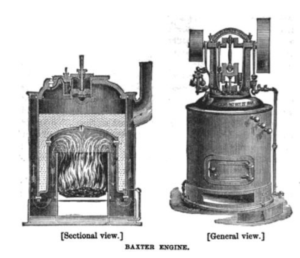 When historians discuss machinery at Philadelphia’s 1876 Centennial Exhibition, it’s usually in reference to Machinery Hall, the sprawling, 14-acre building that housed a massive Corliss steam engine and technological innovations as far as eye could see.

But nearby, in the Women’s Pavilion, was another steam engine, the Baxter engine, churning away and powering several machines. The Women’s Pavilion was born out of controversy after a group of women were denied the privilege of exhibiting in the Main Exhibition Building. Fourteen women formed a committee to construct their own pavilion, and the leader, Elizabeth Duane Gillespie, declared that only the abilities and inventions of women were to be on display.

Many of the machines on display were powered by a Baxter Portable Engine, a steam engine boasting six horsepower. The engine’s operation was overseen by engineer Emma Allison, who became a marvel in her own right as at the time a woman operating a steam engine was very uncommon. She was mentioned in the Saturday Evening Post, Scientific American, The New York Times, and The Philadelphia Times, although not always in a flattering light.

To hear more about Emma Allison’s experiences and work as a steam engine engineer, join us during International Women’s Weekend where a reenactor will portray her and celebrate her achievements and Dr. Louise Krasniewicz from the University of Pennsylvania’s Department of Anthropology will present a special lecture on this fascinating historical woman.