Join us to commemorate the 200th anniversary of the birth of John Fritz, General Superintendent and Chief Engineer of the Bethlehem Iron Company, with a series of public events.

In September of 1892, hundreds of guests gathered to celebrate the 70th birthday of John Fritz. They held a dinner celebration at the Wyandotte Opera House in Bethlehem, PA and after dinner held a mock trial in which Fritz was “prosecuted” in jest for the “crime” of transforming the peaceful, rural Lehigh Valley into an industrial powerhouse. They took the photograph above the following day during their tour of the Bethlehem Works and visit to the proving grounds to witness a demonstration of how well the new armor plate being produced stood up against shell fire. Fritz is seated in the front row, 10th from the right. Distinguished attendees included Thomas Edison, Robert Sayre and Rear Admiral George Wallace Melville.

Join us for a reading of “The Giant Moves,” a children’s book exploring the history of the museum’s 19th century bending press envisioned by ironmaster John Fritz & stay for some birthday cake.

3:30PM The History of the Bending Press

Join Museum Historian Mike Piersa to learn about the history of the recently relocated Whitworth Bending Press. Applying up to 7,000 tons of force, this nearly million pound press shaped steel armor plate bound for battleships that bolstered U.S. efforts in both World Wars. 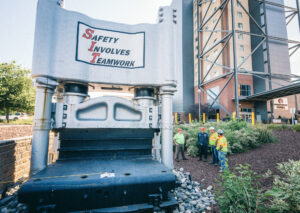 4PM A Historic Move: Bringing the Bending Press to NMIH

In September 2020, NMIH began the monumental move of a 900,000 lb Whitworth Bending Press to its new home at the museum. Installed in 1891 when Bethlehem Steel was still Bethlehem Iron Company, this hydraulic armor bending press utilized 7,000 tons of force to create armor for battleships. Hear from Nick Lykon, General Manager of A&A Machinery Moving, an MEI Company, about the tremendous undertaking of moving the press to NMIH.