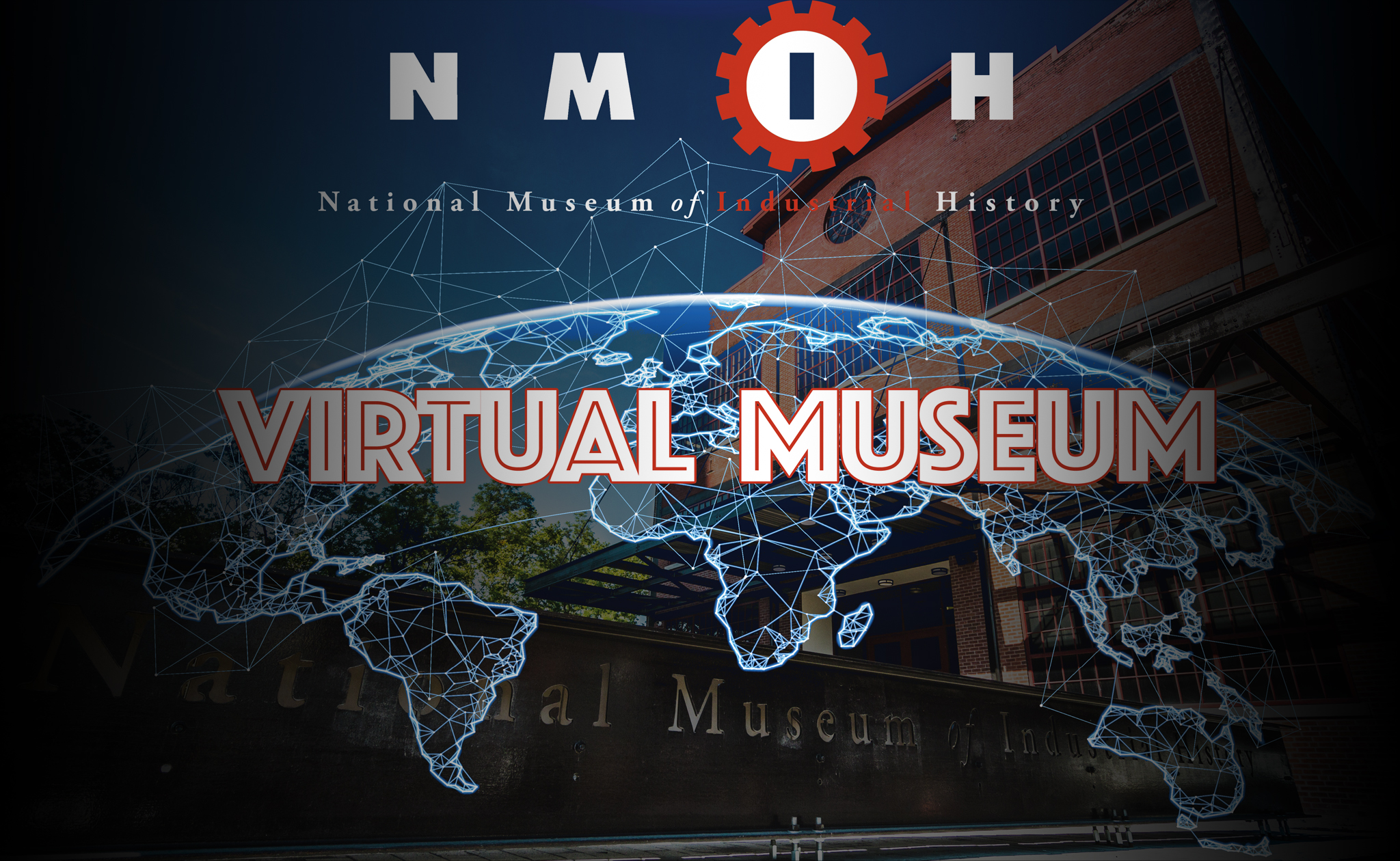 With individuals and families across the nation practicing social distancing and self-quarantine, NMIH is taking its mission of educating the public about America’s industrial past and inspiring the visionaries of tomorrow online.

Below you will find a list of live online lectures and presentations being streamed through Facebook Live featuring staff from Smithsonian’s National Museum of American History, rare looks inside Martin Tower prior to its implosion from NMIH’s staff photographer, and a fascinating and timely look at how the 1918 influenza pandemic affected Bethlehem Steel and industrial manufacturing. We’ll also be hosting a daily online ‘industrial story time’ featuring award-winning and New York Times bestselling children’s books focused on industry and architecture.  Please check back as we continue to add live programming throughout the museum’s closure. Virtual patrons can also take a 360 degree tour of the entire museum on Google Maps, a service donated by Bethlehem’s HomeSpot Media.

The museum is also offering its self-published book, “The Big Green Machine,” about the story and restoration process behind its massive 115-ton Corliss steam engine, in digital format for the first time.  For $18 patrons will be able to download the book and receive a physical version shipped to them following the museum’s reopening.  One-hundred percent of the proceeds go towards helping the museum recover from the effects of the coronavirus closure.

The museum realizes that millions of businesses and workers are feeling the effects of the current situation right now. As a non-profit museum, we’re no different. We’re deeply grateful for any help provided to the museum during these trying times.

Additional ways patrons can help support the museum’s mission include purchasing memberships, shopping in the online gift shop, adopting an artifact, making a gift to the museum’s annual fund, or booking a future event.  For a full list of ways you can help the museum, please visit http://www.nmih.org/nmih-coronavirus-update.

Purchase a digital copy of “The Big Green Machine”
The Big Green Machine chronicles the history, preservation, and restoration of No. 3 – Snow Pumping Engine from Billhart Station, York Water Company, York, Pennsylvania written by NMIH historian Mike Piersa.  Purchase includes a digital copy of the 17 page book and a physical copy which will be mailed following the museum’s reopening. Digital copies will be emailed separately from your receipt within 24 hours of purchase.  Buy now.

Monday, March 30th at 10am
From the Archives: Mining Photography of George Bretz
Shari Stout from The Smithonian’s National Museum of American History will be presenting an online lecture featuring the historic mining photography of George Bretz. The National Museum of American History is home to an array of mining lamps, hats, and safety equipment, much of it from the anthracite mines of Pennsylvania. In 1884, the Smithsonian displayed a series of photographs taken inside a mine in Pennsylvania by George Bretz, a photographer from Pottsville, PA. Shari will show us some of these photos, talk about the history of these collections, some of the materials collected with them, and the original curator who initiated the photo shoot.

Shari Stout is a collections manager in the Offsite Storage Program at The Smithsonian’s National Museum of American History in Washington, DC, and holds an M.A. in Museum Studies from George Washington University. She has worked at the Smithsonian since 1999, installing exhibitions and caring for a wide range of collections, including the mining collections. Ms. Stout works with everything from glassware to sculpture to locomotives, but specializes in planning and overseeing the movement of the museum’s largest objects. Ms. Stout played a key role in the installation of the Smithsonian collections for the 2016 opening of the National Museum of Industrial History.

Virtual Museum Tour
Virtually visit NMIH with this 360 degree tour that HomeSpot Media graciously did for us back in December. https://goo.gl/maps/GzRevYyvCGERZnuc6
**For best results please view on a laptop or desktop. Mobile users may experience some compatibility issues.**

Inside the Demise of Martin Tower with NMIH Director of Marketing and Public Relations Glenn Koehler
As part of the museum’s staff, Koehler accompanied volunteers, the museum’s curator, and the museum’s historian as they recovered artifacts for the museum’s collection prior to demolition of Bethlehem Steel’s former headquarters in May 2019.  This intimate look spans five years of photography, from when the building was still intact to its final, gutted form prior to implosion.  His presentation and Q&A will show views and areas few got to see, from the boiler room in the basement of the building to the sweeping vistas as seen from the rooftop.

Bethlehem Steel, Industry, and the 1918 Influenza Pandemic with James Higgins
102 years ago, the great influenza pandemic swept across the globe, claiming as many as 50 million lives. In the United States, Pennsylvania was hit the hardest. More than 67,000 Pennsylvanians died during the crisis’ most acute phase. This haunting and timely look will examine the virus’s impact on industry, and detail how the then-prosperous Bethlehem Steel helped the community around it suffer some of the lowest mortality rates.

James Higgins is a historian of medicine and concentrates especially on the history of the influenza pandemic in Pennsylvania and Texas. He now lectures at Jefferson University in Philadelphia and Rider University in Lawrenceville, New Jersey.

The President’s Pump with Mark Connar
It is well known that Bethlehem is the home of the first municipal water pumping system in the United States. A replica of this machine is located in its’ original stone building in Historic Bethlehem’s Industrial Quarter. Much less known is that, little more than a century later, the largest steam driven single cylinder stationary water pumping engine in the Americas was erected only a few miles away at a zinc mine in the Upper Saucon Township village of Friedensville. This engine, renowned at the time as The President Engine, was designed and constructed by Cornish engineers using time tested old-world technical know-how coupled with American manufacturing talent. Although not publicly accessible, the remnants of this machine still exist today. This talk will focus on efforts underway to preserve the surviving engine house ruins and to convert the surrounding property into an open-air interpretative museum and heritage park.

Mark W. Connar is a retired businessman with an AB degree in anthropology from Brown University (1972) with post graduate study in archaeology at the University Museum, University of Pennsylvania. He has participated in archeological surveys in the United States and the United Kingdom. He also holds an MBA degree from Lehigh University (1984). He is on the Board of Trustees, Historic Bethlehem Partnership and is a Founding Member of the National Museum of Industrial History. Further, he is a member of the Mine History Association and the Society for Industrial Archeology.

Gordon Baker worked for twenty years at Bethlehem Steel’s Fabricated Steel Construction Division working on bridges and buildings. During this period, he was a Field Engineer in New York, worked in the Engineering department in Bethlehem, was Assistant Works Engineer in the Leetsdale Pittsburgh plant, and was Superintendent of the large Pittsburgh shop facility. His career included working on two suspension bridges in New York, the Commodore Barry Bridge, Martin Tower, the world’s largest radio telescope in Puerto Rico and numerous other structures. Gordon is a retired Licensed Professional Engineer and a graduate of Lehigh University’s civil engineering program.