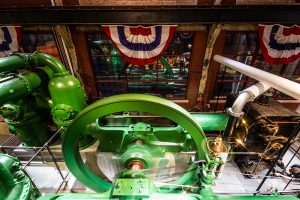 For more than a decade the museum’s staff, volunteers, and community partners worked to restore the engine to working order, 105 years after being built by the Snow Steam Pump Works in Buffalo, N.Y. The engine was used by the York Water Company and pumped eight million gallons of water per day. Today the engine, the most powerful operating water works steam engine in North America, is a focal point of the museum’s 13,000 square foot exhibit space, where it has painstakingly been mechanically restored to its former glory and repainted its original color.